Stay up to date with us 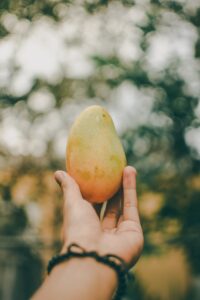 History tells us some very interesting facts about Mangoes. Fossil evidence shows us where and how long ago the first Mango was found and where it was first cultivated, while historical reports tell the story of how it spread to other parts of the world.

Where was the first Mango found?

The history of Mango began thousands of years ago on the Indian subcontinent where, according to legend, the Buddha was presented with a Mango grove so he could rest in the shade. Legend aside, fossil evidence indicates that the Mango made its first appearance 25 to 30 million years ago in northeast India, Myanmar and Bangladesh. In these areas Mangoes have been grown for more than 4,000 years and it was probably here, on the Indian subcontinent, that Mangoes were first cultivated for domestic use.

How did Mango spread to other countries?

According to historical reports, mango plants were taken on voyages to Malaya and eastern Asia by Buddhist monks as early as the 4th and 5th centuries BC. Throughout the ages the Mango gained popularity, and by the tenth century AD, Persian traders had taken it to the Middle East and East Africa. With the arrival of the Portuguese in India in the 15th century, it was later spread to South America, the Philippines and to West Africa. By the 1800s, the Mango had found its way to Australia where it has been grown ever since. At the present day, Mangoes are being cultivated commercially throughout tropical and subtropical areas of Australia and the rest of the world.

Want to know more about our Mango products?